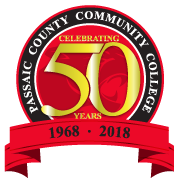 Over 1300 Graduated in PCCC’s 47th Commencement

Graduating students, faculty, and administrators processed into the gym where a crowd of friends and family cheered. Some 39 flags representing the birth countries of the Class of 2019 provided a backdrop
to the dais that illustrated the celebrated diversity of PCCC.

The theme of this year’s Commencement “Celebrating 50 Years,” continues the three-year commemoration that began in 2018 of PCCC’s founding in 1968.

The Pledge of Allegiance was led by Valeri Al-Touma and Andy Perales, members of the 2019 All-USA Community College Academic Team.

A rousing rendition of the national anthem sung in gospel style by Akua Wilder was followed by an Invocation, delivered by Reverend Dr. Randall Lassiter of Calvary Baptist Church in Paterson.
Dr. Steven Rose, the president of PCCC, welcomed everyone to Commencement and noted that the evening ceremony was attended by “the biggest group we ever had in one room.”

In a yearly Commencement ritual, the president provided a glimpse of the graduating class through some fun facts and jokes. “The Class of 2019 is 63 per cent female,” Dr. Rose announced, getting laughs when he followed that with the question, “So what per cent is male.”

He noted that every community in Passaic County was represented by the graduating class with most of them, 364, coming from Paterson. Some 122 graduates majored in Human Services and Social Sciences.

Harvey Nutter, Chairman and longest serving member of PCCC’s Board of Trustees, directed the Class of 2019 to stand, “do an about face,” and applaud their parents and other loved ones sitting in the bleachers. “They supported you, so you could get to this day,” he said.

John W. Barlett, director of the Passaic County Board of Chosen Freeholders, urged the graduates to “savor every moment” of this day that represented their reward for hard work. He detailed the growth and influence of PCCC as “already an award-winning college, and one of the best of its kind in the country.”

Mr. Bartlett offered the graduates two pieces of advice gleaned from his years as a lawyer. “No matter how small a job seems, always give it your best,” and “Never stop networking.” Placing value on a task and on those who come into your life, he said, can reap both personal and professional rewards.

The Class of 2019 featured three very different and equally engaging valedictorians. Henry “Hank” Cenicola, the morning speaker, is the oldest valedictorian in PCCC history. At 72, he is also the first person to earn the AAS Degree in Culinary Arts.

“I understand a short speech is a good one,” said Hank when he approached the podium, joking that by those standards, “this speech will be great.” Hank commended the “amazing chefs,” he learned from. “They were enjoyable and nurturing and had a genuine desire for our success.” He followed with heartfelt thanks to PCCC, his professors, and his family. Confessing that he at first worried that he would not fit in with young classmates, Hank told his fellow graduates that in coming to PCCC, “An unexpected benefit, was getting to know all of you.” (See Hank’s speech)

Wara Laura, who received an AS Degree in Computer Information Sciences, delivered a fierce speech in the evening ceremony that brought the audience to a standing ovation. An immigrant from Bolivia who spoke no English when she arrived in the U.S., only six years ago, Wara started PCCC as an ESL student, graduated with a perfect 4.0 GPA. Denouncing the anti-immigrant attitudes in today’s political climate, Wara declared, “Even though we are living in an age when immigrants are seen as criminals, we work, we go to school, and sometimes we become the valedictorian.”

Wara choked up when sharing the story of her sister, who is now in a detention facility in California.
“She was not as lucky as I was.” With thanks to her professors and advice that her fellow graduates “fight for your dreams,” and “keep moving forward,” Wara called out to her mother, who had traveled from Bolivia and was sitting in the audience. “You have supported me at all times and are an eternal gift.” (See Wara’s speech)

In an equally personal, touching, and often funny speech, Carolyn Lindner – also an evening valedictorian – told a story about how she struggles with anxiety and, after graduating from high school, did not feel ready to go away to a large university. “I enrolled at Rowan, settled into my dorm, and left the following day,” she said. “PCCC gave me my life back,” said Carolyn who earned in AA degree in Liberal Arts/Psychology and hopes to become a neuropsychologist one day. A fervent baseball and softball fan, Carolyn considers her 4.0 GPA to be “a perfect batting” score. Thanking the PCCC faculty and administrators who helped her address her anxieties and her family for supporting her through them, Carolyn said her father “showed me I’m stronger than any obstacle.” (See Carolyn’s speech)

In charging the Class of 2019 to “go out and change the world,” Dr. Rose reminded them that “People all over the world are watching live streams of this ceremony.”

Closing the ceremony, Reverend Caffie Risher, also a PCCC professor, offered a benediction. A reception followed in the PCCC cafeteria.

Spotlight on Our Graduates 2019